Today, I am happy to interview GrozzleR about a funny platform and puzzle game, Fractured !

- You're an indie game developer based in Canada, could you introduce yourself?

I'm A. Scott McCallum, known online as GroZZleR, and I've been a hobbyist game developer for over a decade. I grew up playing video games and decided very early in my life that it was my goal to make them. I began learning to program when I was 12 (I'm 32 now) and haven't looked back.

My favourite game of all time is Ultima Online prior to the Renaissance expansion.

- What kind of games do you create?

For the last few years I've been working on free Flash games (http://www.kongregate.com/games/GroZZleR) to cut my teeth as a game developer. Flash is the perfect platform for creating easily shared games that help you grow as a developer - the immediate feedback helps immensely with learning where a project went wrong or right. The most popular game I've released was the original Fractured, it was actually one of the most distributed Flash games of 2013, and has a play count in the tens of millions.

- Well done! Now let's talk about Fractured, your slicing puzzle platformer. Could you explain the goal of the game?

It's a platformer game locked to a single non-scrolling screen except everything is cut into segments (fractures, if you will) that are re-arranged around the screen. Something beside your character on the screen might not be beside the character in the world, and it's your job to figure out where to go next based on contextual clues placed in the scenery.

A picture is worth a thousand words so this should help clear it up : - How did you come up with the idea?

It will sound a little cliche but the idea actually struck in the middle of the night and I had to scramble to find a pad of paper and pencil to sketch out a concept level. The next morning, still trying to piece together exactly what the mess on the paper meant, I had a sort of *aha* moment and immediately began programming the prototype. It took me longer than I'd care to admit to program the functionality of cutting up the screen in Flash, and the first iteration was a boring mess: a single square screen divided equally in four pieces with no spacing or margins between each piece - but I knew I was on to something.

The rest of the game came about very organically. Why is this world shattered into pieces and who would see the world like this? Once you answer those questions, the rest falls into place.

- Fractured is an original indie game in which each stage's background is shattered into several pieces. It makes us think of Continuity. Could you explain the differences between the two games? 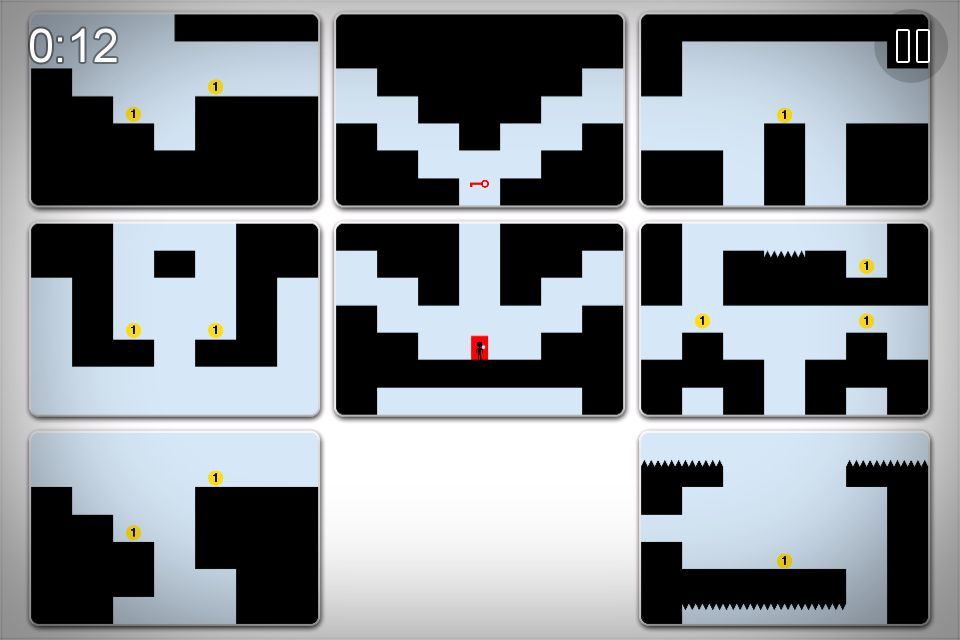 I've never seen Continuity before but it looks like a lot of fun! There's definitely some similarities here, as you navigate between smaller sections of a bigger level, but the way you manipulate the world in Continuity is very, very different from Fractured.

- Fractured is fairly difficult if you play too quickly, it's easy to find a way to die. Could you share some advice to beat each level?

The key to successfully navigating a Fractured game is to mentally connect the items in the scenery. If a poster is cut in half and you're next to the bottom half, look around the screen until you find the top half. Now you know exactly how those two pieces fit together. I think the first few levels are generally navigated in chaos until everything "clicks" for the player and then they can enjoy the experience as more of a puzzle game and less as a platformer.

- What can you tell us about Fractured 2 and Fractured 3?

Fractured 2 follows the story of a daughter searching for her father, while the original told the story of a son looking for his mother. It's more or less the same experience, just larger and more difficult. Fractured 3 adds a metroidvania spin to the series by adding another layer to the world, with each individual screen having multiple exits to a much larger world. Your goal isn't as clear and you're left to explore the landscape until you figure it out.

- OK, so now you'll have to suggest us some other games to test. What kind of games do you love playing?

I love games from every genre but here are some of my must plays: Civilization, Contra, Demon's Souls, Fallout, Full Throttle, Metal Gear Solid and Ultima 7.

- Hardcore Joueur loves the slicing gameplay concept! We have already introduced Rooms on the blog, could you suggest any other slicing platformer, puzzle or action games?

Nitrome's Faultline (http://www.nitrome.com/games/faultline/) is a brilliant puzzle platformer where you crunch chunks of the world together to navigate the puzzles. It's tricky to explain but is absolutely fantastic. I've always wondered how they managed to code it. - Thank you a lot for this interview!

My pleasure. Thanks for reaching out. And now, it's time to play Fractured